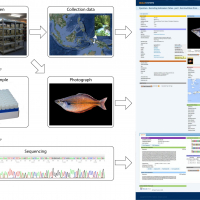 With nearly 1200 species, inland waters of the Indonesian archipelago illustrate the challenges inherent to the conservation of fish resources in tropical regions.

The characterization of species diversity is a prerequisite for the study of the dynamic of community assembly and the functional support of ecosystem services. However, the increasing use of DNA sequencing has shown that molecular-based systematic studies often challenged the taxonomy established using morphological characters. This finding is based on the fact that many species are morphologically similar despite the presence of important ecological differences leading to contrasting functions in ecosystems. This cryptic diversity does play a major role in ecosystems, especially in the tropics where its represents the majority of the biodiversity in natural ecosystems and supports itself an important part of the ecosystems functioning.

The objectives for an Indonesian barcoding initiative are:

(1) Building a reference library of barcodes for all described freshwater fish species still present in nature and designed for online free access and use (www. boldsystems.org).

(2) Speeding up the inventory of the Indonesian freshwater fish species through large-scale sequencing for the discovery of new species.

(3) Fostering the application of the library of reference for the management of ichthyological resources.

This barcoding initiative will be directed towards an ecosystem-based approach and focused on the most endangered ecosystems of the archipelago such as the ‘black water’ ecosystems associated with the remnant patches of primary forest or the ‘clear water’ ecosystems from the karstic shields.