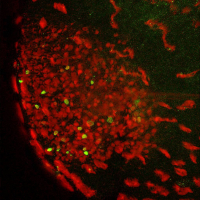 Olfaction is an important, but little understood, part of the sensory system of nearly all of animal life. Both arthropods and vertebrates have similar organization in their olfactory system, with basic units of organized synapsis, called glomeruli, that connect the olfactory receptor neurons to higher brain centres. Investigating the presence of glomeruli in a third animal clade would provide insight into how olfaction evolved similarly across such highly disparate taxa. Phyla Mollusca is an ideal candidate, since it is the largest of the marine invertebrates, second most abundant, and the most diverse phyla in the animal kingdom. Glomerular-like structures have been reported in some molluscs, although none have been described conclusively. To elucidate the presence of glomeruli or glomeruli-like structures, we utilize the most divergent of the molluscs, cephalopods. Of the cephalopods, one species provides the best opportunity for insight. Sepia officinalis, the common cuttlefish, is an abundant species found in the eastern Atlantic. An excellent model organism, S. officinalis is easily accessible, conveniently sized, and has rapid embryonic development. We hypothesize that we will find glomeruli, or glomerular-like structures in S. officinalis, and through newly developed techniques, will describe the development of the cephalopodic olfactory system.

Together in collaboration with  Dr. Roger Croll (Dalhousie University, Canada), we developed a protocol for collection, dissection, and fixation of S. officinalis embryos for whole mount immunohistochemistry to visualize the peripheral olfactory system. We have successfully labelled the olfactory pits and olfactory tract via anti-histamine and anti-tubulin antibodies. Our current goals are to extend this research to include additional neurotransmitters, and increase our visualization to include the central nervous system and brain. In addition, we aim to incorporate in Situ Hybridization and other molecular biology work to describe the differentiation of the olfactory system, and a Canadian student (Lexi Scaros) will be hosted from January to June 2016 in the Cephalopod Team in Paris.