My present research is structured around two main themes:

The overall aim of our work is to identify the molecular mechanisms involved in thermal tolerance of deep-sea vent species, and it is included in a more global approach of the thermal tolerance processes in thermally variable environments. For the last few years, we have indeed developed comparative studies in shrimp from diverse thermal environments in order to elucidate the thermal adaptations of vent shrimp, as well as the selective role of temperature and pressure in the deep ocean colonization processes.

We are currently focused on the following aims:

This topic is an emerging research subject since, except for a few model species like lobster and crayfish, sensory adaptations are still largely unknown in Crustacea. 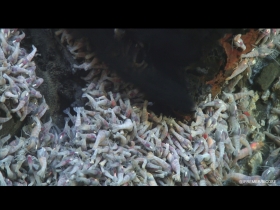