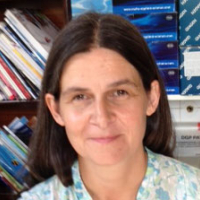 My research concerns the neuroendocrine control of metamorphosis and reproduction in teleost fish. My biological models are the European eel, Anguilla Anguilla, and the Atlantic salmon, Salmo salar. The aim of my studies is to search for the actors of the different neuroendocrine axes, which are involved in the control of metamorphosis and reproduction. It is also to investigate their regulations by internal (such as sexual and metabolic hormones) and external (such as temperature and photoperiod) factors as well as their variations during development and sexual maturation.

The European eel is a species listed on the IUCN (International Union for Conservation of Nature) Red List of Threatened Species since 2008. Indeed, global stock of European eel populations has been declining continuously over the last decades, and this decline is particularly alarming since the aquaculture for this species is still not self-sustained and relies entirely on glass eel stocks. One of the reasons for the difficulty to reproduce this species in captivity is that, at silver stage, this fish remains blocked at prepuberty as long as its reproductive oceanic migration does not occur. My researches aim at finding new actors of the reproductive axis (gonadotropic axis) and/or factors able to activate this axis, in order to propose innovative protocols to induce sexual maturity. The ultimate aim of theses studies is to participate in the establishment of a self-sustained aquaculture.

The Atlantic salmon performs a downstream migration towards the ocean, which requires drastic morphological, physiological and behavioural modifications, termed smoltification (secondary metamorphosis). In addition to be controlled by hormones, smoltification and downstream migration are influenced by environmental factors (photoperiod and temperature). Atlantic salmons from Allier River represent a unique population, the last one in Europe capable of a long migration (800km between estuary and first spawning grounds). This population, whose number has been reduced because of many anthropic factors (dams, habitat degradation, water pollution), is now classed as endangered. These last decades, climate warming and local human activities induced a mean water temperature increase of 2°C, which will be even amplified by global warming. My researches aim at characterizing the neuroendocrine control of smoltification and migration, and at studying the impact of water warming on this control, in a context of conservation of long river (Loire-Allier axis) salmon.

I am a member of MNHN ethical committee (Cuvier committee).