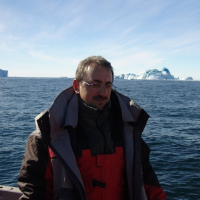 My research activity can be summarized around four topics:

My research project consists of finding indicators in the pelagic ecosystem (communities, species and ecophases) to study the biogeography species from the surface to the deep sea. Beside the fundamental approach which aims to define the habitats of pelagic species, this project can help to propose conservation measures in the high seas.

My major field work area is the Southern Ocean after many years studying the English Channel, the North Sea and the Mediterranean Sea.

Since 2003, we developed observing programmes in the Dumont d’Urville Sea from the R/V “L’Astrolabe” or from the R/V “Marion Dufresne II” in the subantarctic Indian zone. The samplings are carried out from two projects. The IPEV ICO²TAKs (Integrated Coastal Ocean Observations in Terre Adélie and Kerguelen) benefits from results of previous programmes such as the surveys in 2008 of the Census of Antarctic Marine Life. For the high seas of the subantarctic Indian zone, in 2013, we started to sample plankton with a Continuous Plankton Recorder.

These researches are integrated in the Zone Atelier Antarctique du CNRS (za-antarctique.univ-rennes1.fr) the international frame is under the programmes of SCAR (Scientific Committee on Antarctic Research).

These studies on the pelagic zone allowed to understand the ecology of the larval ecophase of fish (distribution, survival conditions,…) and to define pelagic ecoregions around Kerguelen and Crozet islands, in the Dumont d’Urville Sea or at the scale of the Southern Ocean with the publication in August 2014 of the biogeographic atlas of the Southern Ocean (atlas.biodiversity.aq). These researches help the process of designing potential Marine Protected Areas in the French Southern Territories (TAAF) or CCAMLR (Commission for the Conservation of Antarctic Marine Ressources).