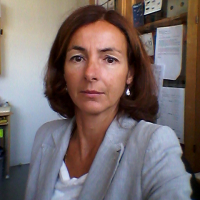 My main topics concern physiology of reproduction of various molluscan species with a focus on the bivalve Crassostrea gigas:

Investigate the reproduction of several species

Gametogenesis in Crassostrea gigas was described for diploid and triploid animals. Indeed, the possibility for triploid to produce mature gametes is of interest because of the potential impact of these animals in natural environment and mainly on diploid oysters populations.

The reproduction of the gastropod mollusc Buccinum undatum in various locations and according to size is also investigated in order to confirm compatibility between minimal fishing size and stock renewing. The impact of temperature on gametogenesis, spawning and development is of interrest in the context of global changes.

In Crassostrea gigas reserves are mainly constituted by glycogen. They sustained the reproductive effort of animals. Specialized glycogen cells have been characterised from histological and metabolic point of view (glucose entrance, glycogen synthesis). The interactions between glycogen reserves and reproduction were also described using controlled conditioning experiments.

Characterisation and fonctions of the insulin system

Characterisation of the neurosecretory system in bivalve species

Metabolic pathway in molluscs also involved internal regulatory mecanisms. The nervous system is the main centre of neurohormones production. Structure and functioning of neurosecretory cells have to be characterized in bivalvia (main studied specices : Mytilus edulis and Crassostrea gigas) 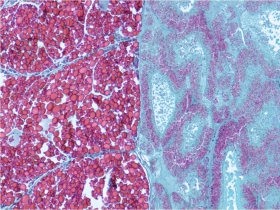 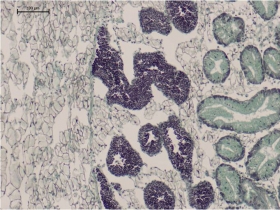