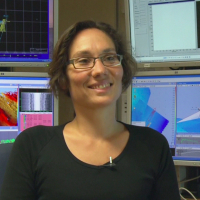 In the AMEX team, we work on chemosynthetic ecosystems, including hydrothermal vents, which are located along mid-ocean spreading ridges that extend through the world's oceans. These ecosystems are extraordinary, fluids escaping from hydrothermal vents can exceed 400°C and are composed of anoxic and reduced chemical compounds such as sulfides, methane, hydrogen, along with heavy metal ions. The sites we have studied are between 800 and 3600 meters deep: there is no light to drive photosynthesis. Organic matter at the base of the food web is produced through chemosynthesis, conducted by chemoautotrophic bacteria. These bacteria are either free living or in association with a host organism, in symbiosis. For ten years, my research has focused on fauna employing ectosymbionts, that is to say bacteria that live outside their host tissue, unlike endosymbionts living inside host tissues. My favorite animal is the shrimp Rimicaris exoculata. Within its hypertrophied cephalothorax, shrimp hosts a veritable "bacterial culture chamber".

The study of this symbiosis has highlighted considerable diversity regarding the morphology, phylogeny and metabolisms of symbiotic bacteria, which has availed the host shrimp with a range of vent sites of markedly different fluid composition for colonization. Recently, we elucidated how these shrimps feed. It has long been known through isotope analyzes of host tissues that shrimp feeds mainly upon its bacteria, but the way it feeds had remained a mystery. Thanks to in vivo experiments employing pressurized IPOCAMPTM aquaria, we demonstrated that the animal does not eat by physically harvesting and ingesting its bacteria as has widely been suggested, but rather by the uptake of bacterial nutrients across the integument. Quite an amazing system when the cuticle of crustaceans is generally reputed to be waterproof!

We recently initiated a new research theme with Juliette Ravaux on sensory adaptation in shrimp. Hydrothermal vents are relatively ephemeral ecosystems, dependent upon volcanic activity along oceanic ridges and can be highly disparate in their distribution. The capacity to detect and seek out non-natal hydrothermal sites through some level of sensory acuity is critical to the dispersal and survival of this species. Fluid detection probably plays an important role both during larval dispersal and colonization and as adults. Indeed adults, especially Rimicaris exoculata, which must ensure a supply of reduced compounds for their symbionts, requiring some sensory competence for detecting the emissions of vent fluid. Much remains unknown in this regard. Questions could include "what are the signals picked up by animals: temperature, concentration of sulfur, food? What are the receptors involved and where are they located? "

I mainly teach the biology of organisms in the form of tutorials and practical work at L2 (Functional Organization of Animals) and L3 levels (both Comparative Biology and Evolution of Animals and Sustainable interactions in the living world: from mutualism to parasitism). At the Masters level, I conduct lessons both for M1 (Ecophysiology) and M2 (Biology and Adaptations to Extreme Environments), where the latter relates directly to the research themes of our team. I am responsible for tutorials and teaching practicals within the L2-Functional Organization of Animals teaching unit, and co-head of the L3- Sustainable interactions in the living world teaching unit. 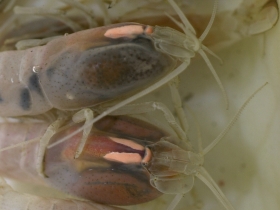