In most developing countries, populations are growing in megacities located on the coast and domestic wastewaters are discharged to the sea most of the time without any treatment. As a result, coastal ecosystems are getting enriched in organic matter and nutrients (nitrogen and phosphorus) that drastically modify their ecological functioning at the timescales of decades to century. These changes concern water quality and biogeochemical equilibriums, as well as biological communities whose development depend on this quality and/or that contribute to these equilibrium: algae, bacteria, and the first links of the trophic chain such as suspended feeders bivalves, benthic meiofauna, and zooplankton. Ecosystem services of the littoral to human societies are also altered, as well as the contribution of these ecosystems to greenhouse gases emissions at regional and global scales.

The CNRS-INEE International Research Project VELITROP is devoted to the study of biological and geochemical mechanisms associated to eutrophication of the littoral in tropical countries, through multidisciplinary approaches. The littoral of the stated of Rio de Janeiro, where the geomorphology, hydrography, and anthropogenic pressure present a large diversity commonly found in tropical regions (Latin America, Africa, Asia), is used a main study site. Indeed, typical tropical littoral ecosystems such as semi-enclosed bays, estuaries, meso-saline and hyper-saline lagoons, mangroves and the continental shelf are distributed along a clear eutrophication gradient observable from satellites, from the urban area of Rio de Janeiro to the preserved region of the Costa Verde. This study area allows studying the mechanisms of ecosystems alteration on spatial scales from km to several hundred of km and temporal scale as eutrophication in the region started about 50 years ago and has constantly intensified and spread since that time. Some comparisons are also planned with sites located in Nordeste of Brazil where the impact of tide might be more pronounced.

The IRP VELITROP is structured in three research topics and also aims to promote educational actions and raising awareness of local populations in the state of Rio de Janeiro. Partnership is organised in Franco-Brazilian small groups of 3-4 researchers that share scientific topics and/or analytical tools.

Topic 1: Spreading of eutrophication at the land-sea interface

The first research topic consist in studying the mechanisms that control the propagation of eutrophication at the land-sea interface, from the most urbanized areas until the continental shelf, using mass balance approaches, satellite observations and bio-indicators.

The second research topic aims at studying the changes in biogeochemical processes that occur in mangrove soils when they receive increasing quantities of planktonic organic matter and nutrients. It involves detailed characterization of organic matter using isotopic, molecular and optical tracers.

The third research topic consist in the study of specific ecosystems with high scientific and ecological interest, that is, hypersaline lagoons; research will concern the microbiology of cyanobacteria mats, carbonate chemistry and the formation of biocalcareous materials, and how biogeochemical processes are impacted by nutrient inputs. 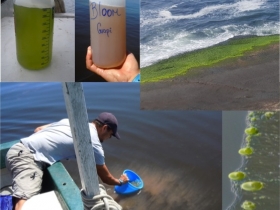 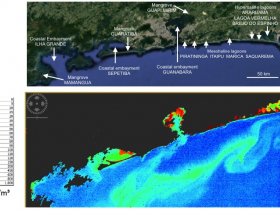