Percentage of basins in which introduced nonnative freshwater fish species have established at the bioregional (blue gradient) and global (black) scales. Only the ten species with the highest percentage of invaded basins are represented for each bioregion; the most common species for each bioregion is illustrated. Solid bars indicate introductions of species not native to the biogeographical region, whereas open bars indicate introductions of species within their native biogeographical region (i.e., a species can be native to part of a region but introduced elsewhere in that region). We used data from Tedesco et al. (2017), which were filtered to include only species for which freshwater is recorded as one of their habitats in FishBase (Froese & Pauly 2022). We used the freshwater fish biogeographical regions defined by Leroy et al. (2019). Photo in panels a–e reproduced from BlueBreezeWiki/Wikimedia (https://upload.wikimedia.org/ wikipedia/commons/5/5f/190729_Guppy_01.jpg) (CC-BY SA 3.0). Photo in panel b reproduced from George Chernilevsky/ Wikimedia (https://upload.wikimedia.org/wikipedia/commons/3/3b/Cyprinus_carpio_2008...) (CC-BY SA 3.0). Photo in panel f reproduced from MarshBunny/Wikimedia (https://upload.wikimedia.org/wikipedia/commons/ d/d3/EasternMosquitoFishJG_Female.jpg) (CC-BY SA 4.0). 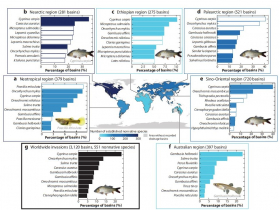 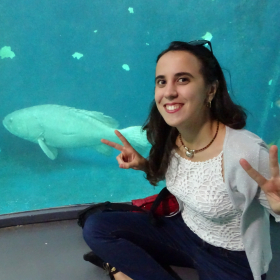