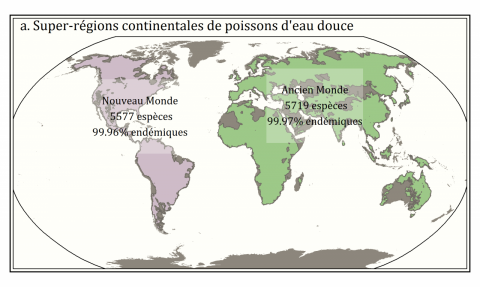 To define the major biogeographical regions and transition zones for freshwater fish species.

We based our bioregionalization on a global database of freshwater fish species occurrences in drainage basins, which, after filtering, includes 11,295 species in 2,581 basins. On the basis of this dataset, we generated a bipartite (basin‐species) network upon which we applied a hierarchical clustering algorithm (the Map Equation) to detect regions. We tested the robustness of regions with a sensitivity analysis. We identified transition zones between major regions with the participation coefficient, indicating the degree to which a basin has species from multiple regions.

Our bioregionalization scheme showed two major supercontinental regions (Old World and New World, 50% species of the world and 99.96% endemics each). Nested within these two supercontinental regions lie six major regions (Nearctic, Neotropical, Palearctic, Ethiopian, Sino‐Oriental and Australian) with extremely high degrees of endemism (above 96% except for the Palearctic). Transition zones between regions were of limited extent compared to other groups of organisms. We identified numerous subregions with high diversity and endemism in tropical areas (e.g. Neotropical), and a few large subregions with low diversity and endemism at high latitudes (e.g. Palearctic).