SOMAQUA - Sources and transfers of Organic Matter in AQUAtic systems

In aquatic systems, organic matter, dissolved and particulate, impregnates quickly and durably, at small (hours, days, months) and large (years, decades ...) spatio-temporal scales, with the combined effects of climate change and multiple anthropogenic influences. Organic matter is also produced, consumed, exported and / or stored in aquatic ecosystems and thus contributes to regulate the concentrations of greenhouse gases in the atmosphere and thus the present and future climate.

In order to better understand and predict the ecological consequences of the environmental transition that is currently impacting aquatic ecosystems and their biocenosis, it is essential to characterize this diverse and complex OM, which is affected by biogeochemical processes (sequestration, mineralization, degradation, food webs ...), to assess its fate in ecosystems, the processes by which it allows the maintenance of biodiversity and the renewal of populations, and to characterize its impact on the fluxes of greenhouse gases at different interfaces.

Based on this observation, the project of the SOMAQUA team aims at comparing the sources and fate of organic matter in two main geographical areas: 1) intertropical zones - mainly in South America, on the Brazilian coast and Amazonian and Andean freshwaters and 2) temperate and subpolar areas in lacustrine, coastal or marine environments. Our main objectives are i) to define the sources and fate of various forms - whether integrated or not by organisms - of OM in aquatic environments; (ii) to use them as indicators of past or ongoing environmental change; (iii) to understand their role in maintaining the diversity of communities; and (iv) to characterize the ecological and biogeochemical processes that regulate their mineralization and the production of greenhouse gases in order to carry out "carbon" assessments of these hydro-ecosystems and to understand to what extent they contribute to the mitigation of global changes.

Axis 1. Organic Matter as a tracer of global changes at the ecosystem level

As a major component of the carbon cycle, OM composition and fluxes in aquatic ecosystems are altered by many perturbations induced by global changes and land and water use. Within this axis, we study the composition and transfer of OM in the waters, sediments, and organisms (fish, bivalves, crustaceans) of different aquatic ecosystems, in relation with the microbial activity (respiration and photosynthesis) and the fluxes of CO2 and CH4 to the atmosphere. These works focus on tropical environments strongly impacted by eutrophication and dam construction, polar areas impacted by climate change and temperate intertidal mudflats.

Axis 2. Sources, transfer and future of OM in organisms

This axis consists of developing and applying bio-monitoring approaches using analyzes of bio-carbonates and biological tissues as tracers of environmental changes. In the Amazon, the temporal variation of trace elements’ concentrations and isotopic signatures in bivalve shells provide hydrological information with a high seasonal resolution. Otolith analyzes associated with the characterization of geochemical backgrounds makes possible the characterization of fish migrations, the tracing of their origin (commercial species), and the study the impact of dams on their population dynamics. Finally, a dual approach sclerochemical - trophic biomarkers that integrate seasonal variations, is implemented in temperate, Arctic and, for the first time, in tropical areas on the Brazilian coast.

Axis 3. Sources of transfer and fate of OM in microorganisms and their metabolites

Microorganisms play a key role in the cycle of organic matter in aquatic ecosystems. Our team focuses on the genetic, molecular and functional diversity of microbial communities and on the functional and evolutionary mechanisms involved in setting up specific communities (biofilms, marine snow type aggregates, sediments and mangrove litter) or symbioses (lichens, sacoglossous slugs). We use biomarkers chosen for their taxonomic and / or functional potential (fatty acids, amino acids, monosaccharides and photosynthetic pigments) which provide information on the interactions between species, the taxonomic composition of microbial communities, the processes of degradation of organic matter and activity of microorganisms. These biochemical characteristics of organic matter are usually coupled with metagenomic data to finely analyze the specific diversity of communities.

Axis 4. Observation, in situ experiments, and modeling for an optimized management of ecosystems

Many disturbances alter biodiversity, biogeochemical functioning, habitat quality, and the ecosystem services of aquatic systems. Induced by climate change and land and water uses, they act mostly in synergy, and their understanding requires the establishment of observation and modeling tools to characterize the mechanisms involved and monitor their evolution on decadal scales. Our team develops and implements a wide range of observation tools, in situ experimentation and modeling in continental, coastal and marine sites in France (English Channel and Archipelago of Chausey, North Sea, Bourgneuf Bay ...), and in America South (Altiplano and Lake Titicaca in Bolivia and Brazilian coastline). 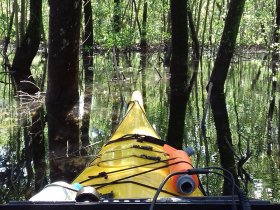 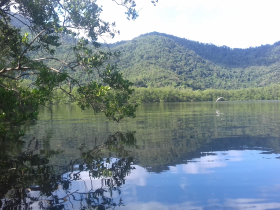 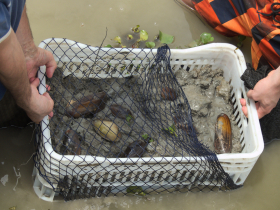 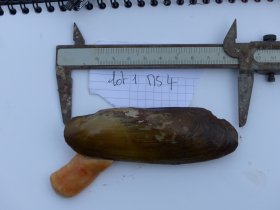