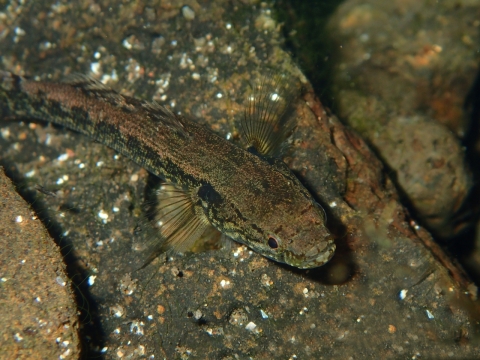 Eleotris species (Teleostei: Eleotridae) are one of the most common fish in Indo-Pacific estuaries and insular freshwater streams. In these rivers, they are a sit-and-wait predator. They have an amphidromous life cycle i.e., adults grow, feed and reproduce in rivers, while larvae have a marine dispersal phase. Larvae recruit back to rivers and settle in stream habitats. Primary characters used to determine Eleotris species are the presence and the disposition of cephalic sensory papillae rows on the operculum and under the eyes as well as scale row numbers. The morphology of these cephalic sensory papillae is of particular importance in this predatory genus as it is generally correlated in fish to predation and feeding. In this paper we have established a molecular phylogeny of the genus based on the 12 mitochondrial protein-coding genes to discuss the relationship between Indo-Pacific Eleotris species. There is a well-supported dichotomy in the molecular phylogeny and this separation into two main clades is also morphologically visible, as it reveals a difference in the arrangement of cephalic sensory papillae. Indeed, the phylogeny distinguishes the species with the "open" pattern of the operculum sensory papillae and the species with the "closed" one. This phylogeny thus reflects the morphology of the opercular papillae. The evolution of this character is discussed in terms of the adaptation of the Eleotris genus to life in tropical insular river systems.